A quick update on the bees. Our temperatures have been unseasonably cold. We’ve had a few sunny days in the 50’s (above 10 C) that have gotten the bees out and about, though many nights are below freezing. I went into the hives last weekend, and my five remaining hives seem to be doing well.

As you can see in the picture, the bees started building comb in the spacer (called an Imirie shim) at the top of the hive. I inserted this in February to add some sugar above the frames. The sugar was gone, and a good bit of comb was built in this hive (Atlas) as well as Calypso. I scrapped off the comb, which is a shame since so much nectar goes into building comb.

Atlas is one of my three Langstroth hives, and was in good shape and rather calm. The bottom was empty so I reversed the boxes to place the bottom box on top. You can do this if the brood is in the top boxes only, which it was. Atlas is a three-medium-box hive and seems to be doing well.

Nearby, in Pandora, the top box was pretty empty. This is a deep-medium-medium Lang hive, and I discovered the brood nest in the bottom two boxes. So I left this hive alone, since there is still plenty of room to store nectar on top.

Calypso was another story. With one deep and one medium, they had built quite a bit of comb in the shim. When I opened it up, the hive went crazy. It was good thing I had a full suit on, and eventually I just walked away from the girls. When I returned I added a medium box of foundation and an upside down cover on top to give them some darkness. I came back after checking the other hives and put the inner cover and top on properly. We’ll have to keep an eye on this one.

My top bar hives both seemed a little weak. The will live into spring, would just prefer to see a few more bees around. The smaller one Venus was more active, though the back of the hive has a few moldy combs from the moisture. Hopefully the bees will expand a little and take care of this in the coming weeks.

Saturn, my other top bar with bigger bars (17 inches compared with 14), is also fine. I added some of Titan’s old combs to the back of the hive to give them room to build out. Titan and Memes didn’t make it through the winter, and with our rain some of their combs are rather moldy. Today is a warm sunny day so I opened them up in an attempt to dry them out. We’ll see what happens.

Finally, the experiment known as our lawn is flowering. Chickweed, henbit, and speedwell are blooming everywhere. Hopefully both the honey bees and the native bees enjoy the early flowers. 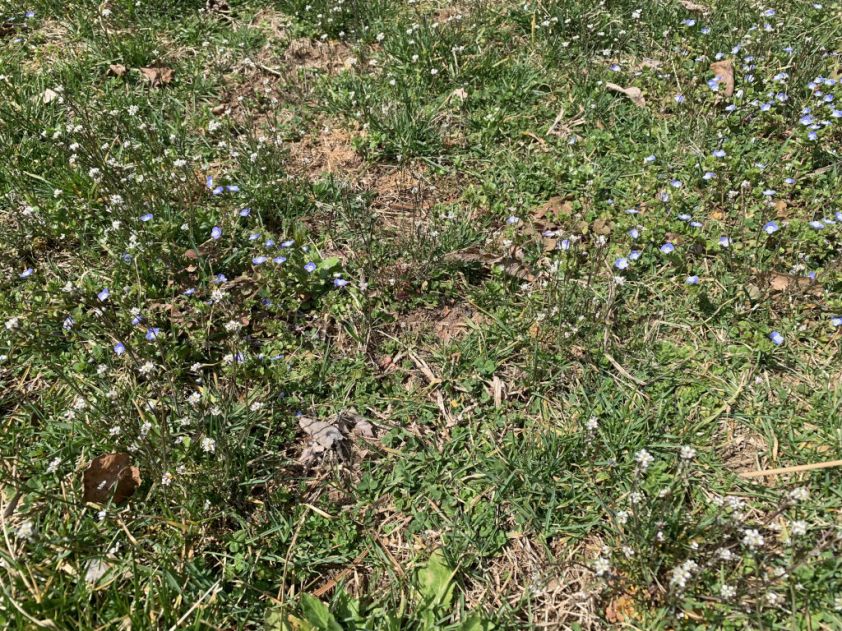 Chickweed and corn speedwell in our lawn on March 30, 2019. ©Erik Brown

Since it was above 70 F (21 C) today I placed a super on both Atlas and Pandora. I am out of built-out comb so gave them foundation. As they expand hopefully they will use it.

Home away from home

According to the Merriam-Webster site, this idiom refers to “a place that is as pleasant and comfortable as one’s own home.” Curiously, it does not appear in my growing collection of books on proverbs, idioms, and other sayings. The Internet, as well, does not appear to have a good sense of where this phrase originated.

According to the Google Books Ngram viewer, the phrase first appears in books in the late 1800’s, gaining usage and appearing more and more frequently starting around 1920. A number of Google’s early matches are across sentences, ans in “…home. Away from home….” which really should not count. An early valid reference is an 1869 book titled “Homes away from Home, and the men who make them in Victoria” by Edwin Carton Booth. This book has the exact phrase in quotes, meaning the author felt it was worth calling out as unique, rather than a saying his readers would recognize.

In any case, it works here because the bees are building new comb outside of what their beekeeper (that’s me!) wants them to call home. It occurred to me while riding a bus earlier this week, and I thought I would use it.