This being January, it is time for my prior year report card. This has been a good tradition to assess how I did against my goals, and it gets me thinking about what I might improve in the coming year.  On my 2017 report card More than honey I gave myself a B, so time to see how we fared in 2018.

My good luck in 2017 did not translate into last year. I started a little early, perhaps, and had loads of troubles. Also learned that queen cells should be in the center of the frames, as on the edges they risk dying of cold. So I restarted and tried again. Eventually I did make nucs, selling one and expanding from 3 top bar hives at the start of spring to 3 Langstroth and 4 top bar hives going into winter. So a success, albiet a difficult one. 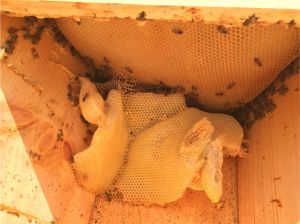 Almost a total failure on this one. I did pull a top bar comb early in the season for about 4 pounds of honey, but that was it. With my nuc problems and all the rain we had, 2018 was not a good year for honey. There is also, I believe, a high density of honey bee colonies in my area, which makes it difficult for a hive to build up strong stores.

I had some heat problems as well, which didn’t help, with 2-3 collapsed combs in my best top bar hive (Saturn). After seeing Wyatt Mangum’s hives at EAS, I have a better way to manage the heat now by leaving air space between the cover and the top bars. Hopefully I won’t have such comb issues in 2019.

I did this! My efforts included mowing the grass higher to leave space for various lawn flowers and leaving the back end of our property to grow meadow-like. Also planted some late blooming plants in our side yard. So well done.

My hives were weak entering winter in 2017. I did better for 2018, though I’m not sure if I did enough better. My small top bar hive (Mimas) and the hive from a late nuc (Calyso) could both be stronger. We will see how they do. So definitely improved winter stores, though still room for improvement. 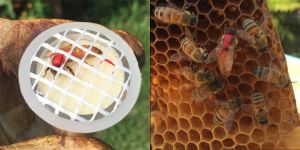 This was my stretch goal, which I managed to achieve. I marked not one, but two queens last year, and even used the appropriate color for 2018 (red).

I found it a little scary to mark a queen, but definitely a feeling of accomplishment. She didn’t want to enter the plastic tube, though I managed to coax her in.I am no where near picking up a queen with my fingers and marking her directly, but it’s a start.

Of course, beekeeping is a multi-year affair. I hopefully have seven hives overwintering at the moment; we will see how they are doing come spring.

A liar should have a good memory

This rather odd proverb comes from my Facts on File Dictionary of Proverbs. If you think on the words, it makes sense. Lying requires making up stories which may be difficult to remember between tellings. According to my book, it first appeared in the writings of Qunitilian, a Roman educator and rhetorician, and showed up in English texts around 1690.

I don’t mean to say beekeepers are liars, although many a beekeeper can tell a good story much like a fisherman. To improve and be successful, in beekeeping and perhaps much of life, takes an honest assessment of past deeds. Having a good memory certainly helps with this.

3 thoughts on “A beekeeper should have a good memory”