Happy 2019 from snow-covered Virginia! It’s been a warm winter thus far; this weekend is the first we’ve seen of the white stuff. When the weather is cold, I prefer to have snow.

My 2018 was a busy beekeeping year, much of it not in my apiary. Since I haven’t been so diligent about recording my adventures here, I wanted to summarize the year with my first post of 2019. 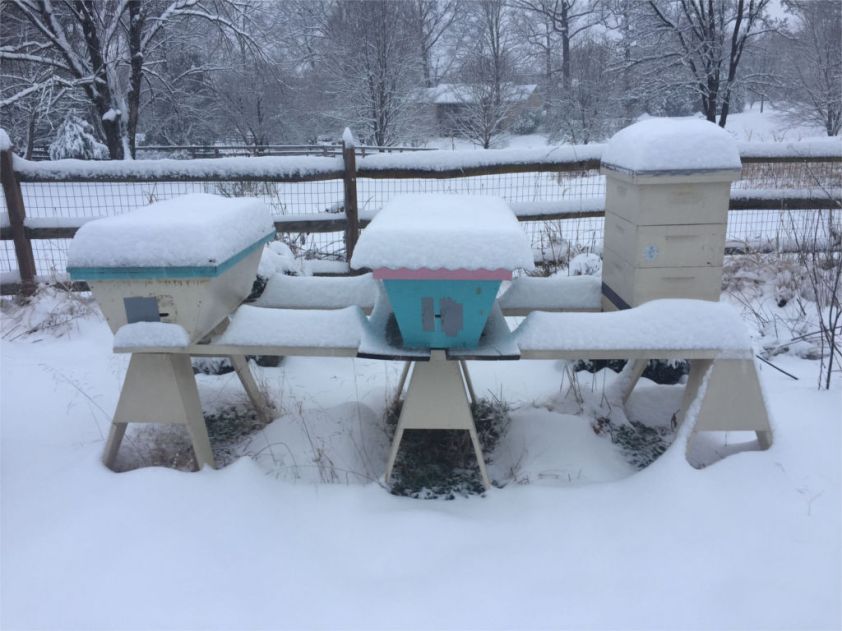 My hives Saturn, Mimas, and Atlas this morning on January 13, 2019 after a night of snow. ©Erik Brown

I prefer a somewhat chronological account, so here is a summary of my year quarter by quarter.

Going into 2018 I had six hives: three Langstroth and three top bar hives. It also started rather warm; my notes say it was 65 F (18 C) on January 12. February was much colder, and looking at my bloom tracking page flowers bloomed two to three weeks later than the prior year.

Between weak hives and cold weather into March, my three Langstroth hives just didn’t make it. Rather disappointing. I was a bit more aggressive with my remaining top bar hives after this, placing medium honey frames in the back to give the bees some added stores. The three top bar hives made it into spring in good shape.

I became president of our local Prince William Regional Beekeeping Association in January. The key role as president is coordinating meetings and events, which I did. This included a Bees & Brew lunch at a local brewery, along with some nice speakers and field days. The presidency is a two-year term, so am still working on this in 2019. 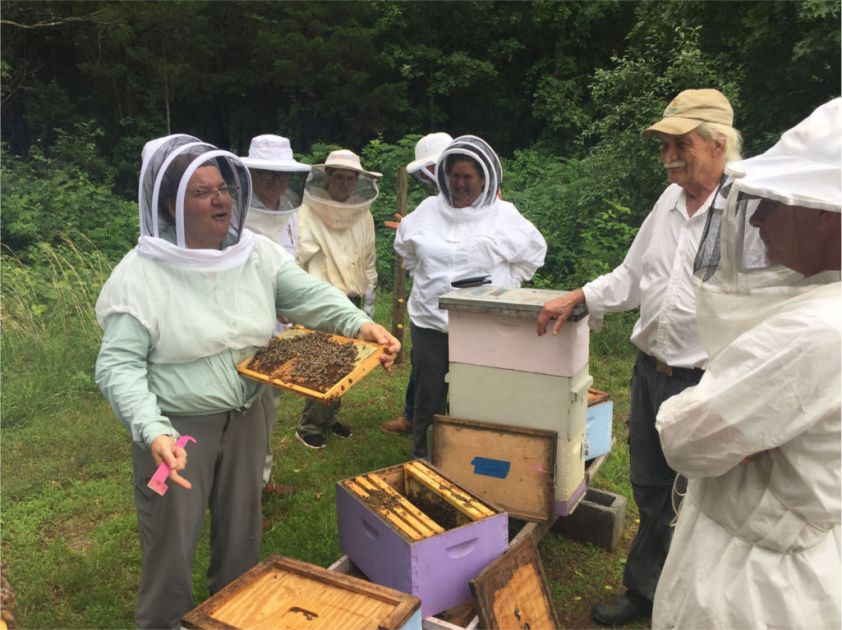 Local beekeepers Karla Eisen and George Wilson in their apiary during our Bees & Brew event in June 2018. ©Erik Brown

Also in the first quarter I became active in planning the Eastern Apicultural Society (EAS) 2018 Short Course & Conference in Hampton, Virginia. I’m told this is the largest hobby beekeeping conference in the United States. A different state (or province) hosts the conference each year, and 2018 was Virginia’s turn. I served as Conference Secretary, organizing and running the weekly planning meeting and doing much of the computer work for registration.

Work for the EAS conference really took off at this point. We registered vendors and individuals, agreed on meals and outside activities, and otherwise put a full conference together. The conference took place in August, in the third quarter.

My top bar hive Saturn built up really well and created a number of queen cells in early April. I was excited to create some nucleus colonies from these. Unfortunately, I didn’t think about the weather. The queen cells tended to be on the outer part of the frames, which was fine in the large hive. In my nucs, there weren’t enough bees to keep these outer edges warm. I should have moved the cells into the center of the frames, where the bees would cluster. So none of these queens emerged. 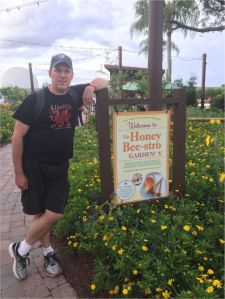 We had quite a bit of rain in 2018, and it was difficult to get queens mated. Or at least difficult for me. I really didn’t get my nucs established until June, which is a bit late for building up winter stores. I sold one nuc, and otherwise created a new top bar hive (Mimas) and three new Langstroth hives (Atlas, Pandora, and Calypso).

We also took a family trip to Disney World in May. Epcot was hosting a Honey Bee-stro in collaboration with the National Honey Board. I wasn’t expecting any bee themes, so was nice to see. Pollinator plants, empty bee hives, and lots of honey and bee informational displays.

This period is a tough time for bees in Virginia. The hot, dry weather leaves few sources of nectar and the bees can eat up their winter stores. I attempted to create more late nectar sources for the bees in our yard, with some success. I also focused on feeding as I felt one of my key mistakes in 2017 was feeding too late and ending up with weak hives. 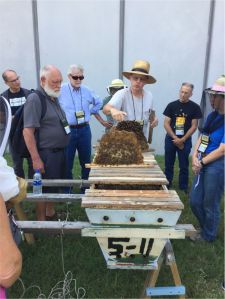 The EAS conference was August 13 to 17 in Hampton, Virginia. The first half of the week, called the Short Course, is more focused on training. The second half is a more traditional conference with keynote speakers and conference sessions.

It was my first full EAS (I attended a single day in 2017) and it went quite well. Keynote speakers included Randy Oliver, Celia Davis, Jamie Ellis, and Michael Young. There was an outside apiary with about 30 hives, including Langstroth, Top Bar, and Warre hives. Events included a local brewery visit (they have a resident beekeeper), an evening river cruise, an English tea with Celia Davis, and a beach barbecue. Lots of fun.

I generated the 800 name tags for the conference, some during the event, and helped coordinate registration, so it was a bit hectic at times. I really enjoyed seeing Wyatt Mangum work his top bar hives in the apiary, and Randy Oliver’s talks on pesticides and hive inspections. 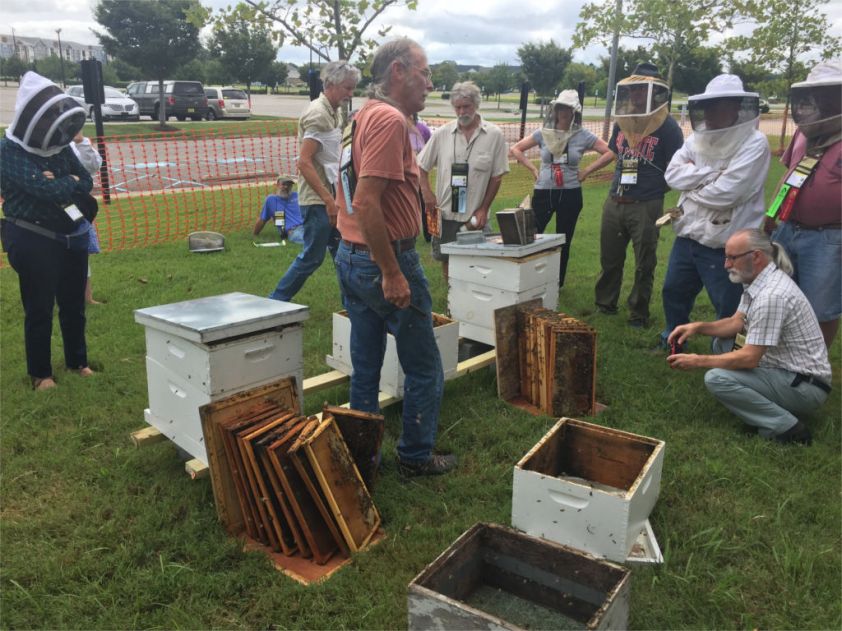 Michael Palmer sharing how he finds queens during queen rearing at EAS 2018. Michael Young is crouching to the right of the hives. ©Erik Brown

In October I posted a summary of my 2018 mite counts. I was expecting to encounter varroa, but the mite counts never quite reached the threshold. So in the end I did not treat my hives in 2018. Two of my three Langstroth hives have screened bottom boards, and the mite drops on these two continue to be less than 1 mite per day. So I still think it was the right choice; we’ll see how well the hives make it into spring. I will certainly check the mites levels early.

Our Fall meeting for the Virginia State Beekeepers Association was held in November. Nice to simply attend a meeting with no organizing responsibilities. Our speakers were Dr. Meghan Milbrath and Ed Karle, both of whom I enjoyed.

For my local club PWRBA, we finished the year by setting up online registration on our web site. Previously annual registration has been manual, which is a bit cumbersome. We’re hoping that an online option will simplify the tracking and encourage more members to renew.

Since I didn’t gather much honey in 2018, I gave the family small candles made from my beeswax. First time making candles, and they turned out great. I look forward to doing more of this in the future. 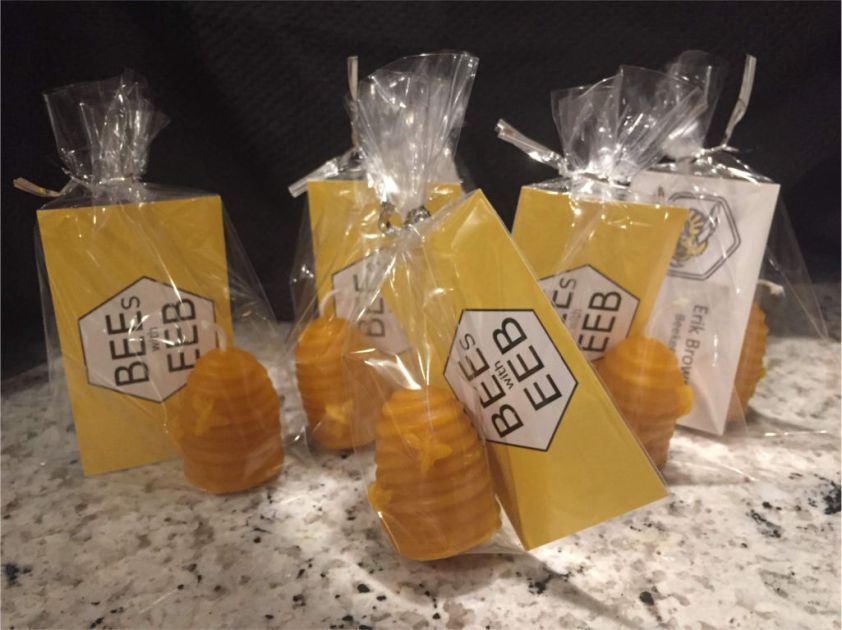 This proverb first appeared in the book Outlandish Proverbs by George Herbert in 1640 (the term “outlandish” meant “foreign” at the time). The phrase captures the idea that books only take you so far, and are no match for years of experience.

This is true in beekeeping as well. Knowing what to do is one thing, remembering while working with thousands of buzzing bees is quite another. Not to mention the patience and skill to do it well. I have read a lot of books, and I have much to learn.

In addition, bees often have their own ideas. They don’t seem to read the books, I’m not sure why. So the title conveys both the independence of bees and the value of experience, and seems appropriate for a year in review.