A brief update on some recent happenings with our local bee club and my hives. We had weather in the high 60’s F, almost 20 C, on Friday. A great time for the bees to catch some relief from our sub-freezing temperatures. It was a brief respite, as Saturday’s temperature dropped into the 30’s F, near 0 C.

While not unexpected, my hive Callisto has perished. She stopped dropping debris on the screened bottom board over a week ago, and I opened up the hive on Friday to find it empty and quiet. With the weather so warm, the other hives were thinking about investigating. I blocked off the entrance so I can go through the hive in more detail next weekend when the weather is colder.

My other weak hive has been Mars. While the bees are still alive, I would be surprised if she made it to spring. Mars was one of my original Langstroth hives, so would (will?) be sad to lose her.

Right now I think Varroa mites are the culprit. I did check and treat in August, but perhaps that was too late for Mars and Callisto. Also performed an oxalic dribble of Callisto last month, perhaps that was a bad idea? The mite drop was so high (10 to 15 per day) that I felt compelled, and with so many mites perhaps she was on borrowed time. There is still honey stores in both hives, so the low population or bee viruses vectored by mites is the most likely cause. Sigh; next year….

The other hives (three top bars Saturn, Titan, and Venus; and Langstroth Ganymede) were very active. Less so for Venus, so we will keep an eye on her. Lots of activity at the other entrances so hopefully they will remain robust into spring.

In other news, we had our first meeting of the year for the Prince William Regional Beekeeping Association (PWRBA). We had a great talk on honey quality from George Wilson. George is a neighbor and friend down the road from me, and runs the Honey Show for the Eastern Apiculture Society conferences. Most talks on honey stop at the extraction process, but George took it all the way to the storefront. He spoke of labeling requirements for Virginia, what makes a quality honey, and options for selling honey from a farmer’s market to placing in stores. A rather interesting talk.

Also part of the evening was George “Papi” Zwetkow, a beekeeper and owner of MurLarkey Distilled Spirits, LLC. Mr. Zwetkow shared a new whiskey produced using beeswax, similar to how butter washed whisky is made. The cappings after the honey extraction process are dipped like a tea bag in the whiskey to instill a slight beeswax flavor. He had samples! It was a very nice whiskey, with the barest hint of beeswax.

The evening began with the election of 2018 officers for the club. With a lack of volunteers, I took on the President role. So I am now President of my local bee club. It is a good club: two strong areas are our teaching program (Bee School) and our organization of nuc sales from members (to make locally-produced bees available). Our web site could use an update, though, and I am interested in discussing how to have more engagement with experienced beekeepers. Our first board meeting is next month, so we will see how it goes.

All the President’s Men 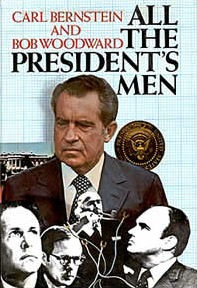 This 1974 book captured the investigative reporting of Carl Bernstein and Bob Woodward for the U.S. Watergate scandal. They wrote a series of articles in The Washington Post that revealed illegal activities by then president Richard Nixon’s men. This eventually led to Nixon’s resignation and the indictment of 69 people.

The title occurred to me since it mentions the word president. Hopefully my term with our local club will not be as scandalous. Of course, losing my hives is a bit of a scandal, though fortunately I am not forced to resign over it. Hopefully I keep the bees a bit better in the coming year.

5 thoughts on “All the President’s Bees”