Way back on November 5 the Virginia State Beekeepers Association (VSBA) had their annual Fall Meeting at Blue Ridge Community College in Weyers Cave, Virginia. Speakers for the one-day meeting included Dr. Kirsten Traynor and Dr. Wyatt Mangum. I took some notes and have been meaning to write up a short summary of the event, so here it is.

Last year’s VSBA Fall Meeting was also at Blue Ridge. The building used includes a large meeting room for presentations and a cafeteria room with vendor displays and tables for lunch. The day included a business meeting and some discussion on the Eastern Apiculture Society Meeting, which is at the University of Delaware in 2017 and coming to Virginia in 2018.

The first presentation by Dr. Kirsten and Michael Traynor focused on Kirsten’s research on the results of pesticide residues in beehives. This research is conducted by the USDA APHIS, which translates to the United States Department of Agriculture Animal and Plant Health Inspection Service (whew!). These surveys are done jointly with the Bee Informed Partnership, with details available at https://beeinformed.org/aphis. 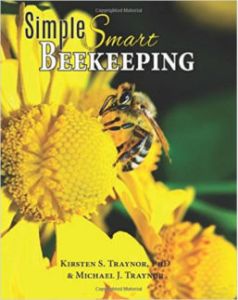 Michael Traynor is a professional photographer, and his pictures throughout the day were truly amazing. Dr. Kirsten Traynor earned her Ph.D. at the University of Arizona and now investigates how pesticides impact honey bee health at the University of Maryland. Together they wrote the book Simple Smart Beekeeping, which I purchased and will have to review in a later post.

It was quite the interesting talk. Including both summer and winter losses, they say, U.S. beekeepers lose around 45% to 50% of their hives each year. Research has not found any one cause, Dr. Traynor called it death by a thousand cuts. Varroa mites, chemicals in the hive, pesticides, loss of habitat/forage, and other factors combine to stress out the bees.

Lots of numbers, one-fifth of samples in 2014 had no pesticide residues, an average of 2.36 residues per sample, and so forth. More residues in spring than other times of the year.

Dr. Traynor presented a term called Hazard Quotient, or HQ, that measures the overall risk to honey bees (or other animals). HQ is determined by dividing the parts per billion of a chemical by the dosage required to kill 50%, called the LD50 (LD is for Lethal Dose). The European Union uses an value over 1000 as a problem, while the U.S. Environmental Protection Agency (EPA) apparently doesn’t raise alarm until the HQ is over 40,000.

Again, more numbers. Almost of all of the samples collected through 2014 have HQ values under the 1,000 value used by the EU. The two states with the highest average values were Nebraska, mostly from neonics, and Oregon, mostly from prallethrin (an insecticide used for pests like mosquitos). Virginia had one of the lowest overall HQ values (yay!). Compilation of the 2015 survey results are in progress.

A few other comments from the talk. The presence of fungicides seems to be increasing, and is often correlated with brood problems like chalkbrood. There also seems to be a synergistic aspect in that hives with high mites tended to have higher pesticide residues, and the presence of varroacides (chemicals used to kill the mites) does not correlate with high overall pesticide residues.

If a beekeeper thinks they have a pesticide kill, they should report it to the EPA at beekill@epa.gov or the honeybeehealthcoalition.org site. Testing is expensive, and the EPA will not test for pesticides if they find a high mite count

Another point made was that farmers are not in an easy position. Their crop insurance often requires that certain pesticides be applied at certain times. Homeowners have more options for avoiding pesticides, and there is now more lawn acreage in the United States than agricultural crops.

So for any homeowners out there, cut your grass high (at 3.5 or 4 inches) and let the clover and other flowers grow. Avoid pesticides, and if you must use such chemicals do so late in the day (after 4 pm) when many pollinators are headed home.

Urban/Suburban Beekeeping: The Human Side

Next up was Toni Burnham, the founder of the DC Beekeepers Alliance, who pointed out that our society is increasingly urban. By 2050, as many as 85% of us may live in urban settings. Urban beekeeping was recorded as early as 1914 in an article that appeared in Popular Mechanics: Girl Has Profitable Bee Farm on City Roof. Quite the interesting story. 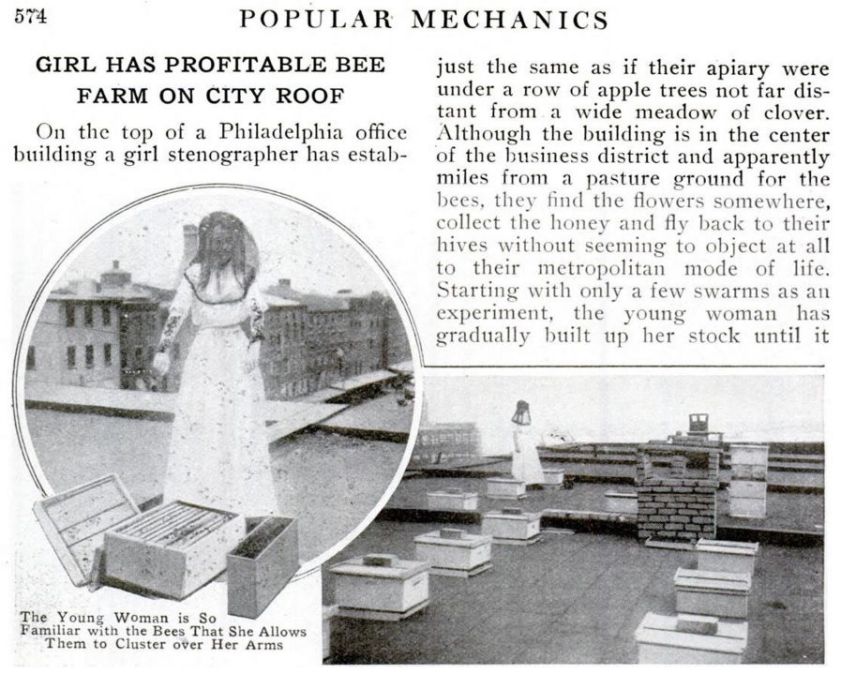 In fact, urban settings may provide an advantage for bees, in that container gardens and edgings offer well-watered nectar sources during dearths. Small hive beetles cannot pupate on roofs. One complainer can ruin everything, though, especially if that person is on the city’s governing body. Similarly, one bad beekeeper can have a big impact on the community.

For urban beekeepers, then, a community is especially important. The DC Alliance works with the city to expand the treescape with pollinator friendly trees. A tree with a 15-foot radius offers 2 acres worth of blooms for honey bees. In Burnham’s area of Washington, DC, there used to be about 30 hives, and now there are well over 200. So robbing can be a serious problem.

Over the Atlantic: Intensive Hive Management

After lunch and some business meetings, the Traynors took the stage again to talk about their time in Germany. Apparently Germany has a professional school of beekeeping, and becoming a beekeeper requires 3 years of training followed by 2 years as an apprentice followed by a rather serious exam.

Germany has apparently been breeding calmer bees for decades, and now requires that students do not wear a veil or use gloves. Queen breeding is tightly controlled and includes a focus on longevity. They will not breed from a queen until she is 2 to 3 years old.

They finished by sharing some practices used in their Flickerwood Apiary. In particular, they advocate pulling drone comb from spring through fall. They place an empty comb in the brood nest and let the bees draw drone comb, then cut it out every three weeks (they don’t advocate freezing, as that is more work for the bees). Then they insert the empty frame back in the hive so the bees will draw out more drone comb. Bees love to draw comb, and this fulfills that need and pulls a large percentage of mites out of the hive throughout the year.

Dr. Wyatt Mangum then spoke on using thermal imaging cameras to assess the state of bees in top bar hives. He is the author of the book 200 Top Bar Hives, which I often use as a reference. Some of his pictures and thoughts on thermal imaging are available on his web site.

The day finished with a discussion of Broodminder by Theo Hartmann. You may recall that I have two of the Temperature and Humidity sensors from Broodminder. I would be interested in their weight scale, maybe next year. More information and some of the data examples are available at Broodminder.com site.

Overall it was an interesting meeting and I am glad I attended. I also took the Apprentice Beekeeping exam that the Virginia association offers. Another topic for a later post.

Each person you meet is an aspect of yourself, clamoring for love.

Our quote of the day comes from the book A Light from the Shadows: Reflections on Oneness, Identity, and the Creation of Experience by Eric Micha’el Leventhal. I have not read this book by my fellow Eric, though perhaps I will have to take a look given this rather apt quote.

Beekeeping is a community affair, as bees operate in an area of over 8000 acres of land. If bees fly up to 3 miles from the hive, this grows to more than 18,000 acres. So in some ways meeting new beekeepers reveals an aspect of who we are and how your bees operate.

May your bees prosper!