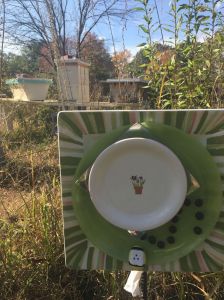 A recent gift from my crafty neighbor in the bee yard. It shows a bee flying in front of a flower. Too cute! ©Erik Brown

My two original Langstroth hives, Mars and Jupiter, have had their ups and downs this year. Mars did well, but then had queen issues. Jupiter survived a split, a swarm that I caught, and likely another swarm that I missed. Both hives are going into winter and I have been checking mite drops on the bottom board of both hives lately.

This is their story.

Varroa mites need larva to hide out and multiply, so these methods slow or stop the queen from laying eggs for a bit and therefore stop the mites from reproducing. They don’t eliminate mites but they can help control them.

Counting mites on the screened bottom board from Mars. ©Erik Brown

At the start of this year, I wanted one hive to make honey. This was Mars. In March I added two medium boxes on top. The bees were building comb, storing honey, and doing quite well. Then I checked for mites.

There were 11 mites in a sample of 300 bees in April, just over the recommended threshold of 3%. At the end of April I treated to kill them off with an organic chemical, formic acid. I found over 200 mites on the bottom board, so it worked. Yay, or so I thought.

Unfortunately the queen also stopped laying for about three weeks, a known possible side effect. This left the hive unable to capitalize on what little nectar flow we had, so the hive produced very little honey. I harvested a single comb. A small victory.

In August I again saw the mite counts creeping up, so I treated with a different organic compound, the thymol-based apiguard. Again the mites fell, and this time the queen seemed fine. 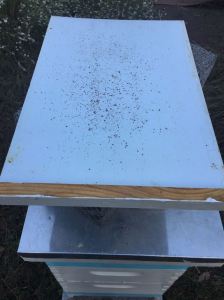 Counting mites on the screened bottom board from Jupiter. ©Erik Brown

At the start of this year, I wanted one hive that I would try to split. This was Jupiter. In March I kept the hive to one deep and one medium to encourage the development of queen cups.

I split the hive in April to create Ganymede, hoping to prevent a swarm. The hive swarmed anyway on April 24 and I caught it in Saturn. So the good news is I had two new hives. The bad news is that it took a full month for the new queen to start laying. The population never grew big enough to really take advantage of what little nectar flow we had.

In mid-July, the population was low again and I found capped queen cups in the hive. So it probably swarmed again that month. Once again there was a brood break and another three weeks until the new queen was laying eggs.

So here it is November, and which hive has more mites? You guessed it, Mars. I know the chemicals only reduce the mites, and what started as a high mite count was probably never fully reduced. Still, have to give credit to those brood breaks in Jupiter. Who knew?

I notice here that I did not do a good job checking for mites after I treated. This is important to verify that the treatment actually worked. Something to improve on next year.

Here we are at the beginning of November. The hive I treated is dropping a good number of mites, while the hive that swarmed and was never treated this year has almost none to speak of.

What does this all mean? I have no idea. I find it interesting that the high mite drop in Mars didn’t translate to a high mite count from a sugar shake on October 30. I didn’t find a brood frame in the hive when I did this, so the count could be a little low. Still too low to treat, though.

The pen is mightier than the sword

My lovely play on words came to me while mulling on this post. According to the BBC and other sites, this wording was first crafted by Edward Bulwer-Lytton in 1839, in his historical play Cardinal Richelieu. According to Wikipedia and other sites, an earlier form appeared in the 500 BC text the Teachings of Ahiqar, where the phrase “The word is mightier than the sword” is used.

I rather like my version, which turns the phrase on it’s head with the clever word mitier, meaning “having more mites” of course. I’m not sure that’s a word, though it’s on the Internet so it must be true.

3 thoughts on “The chem is mitier than the swarm”