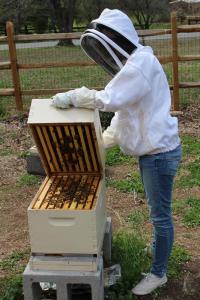 My helper G looking at the queen cups between the boxes of Mars.

This post was meant to appear a couple weeks ago with a short summary of my spring preparations. I’ve been crazy busy of late, and given that the advent of spring has taken a recess, I figure a summary of my beekeeping status will suffice.

Here I’ll just give an update on our existing hives. I’ve done some work getting the hives ready, and will save this for another post.

After a warm winter and early blooms all around, we’ve settled into some cold, wet weather of late. This morning we even had some snow for about one minute, then a little rain and hail, until settling into a cloudy afternoon. I spent the last few weeks painting boards and hives, although I had to do this in the basement as it’s been too cold outside.

Hoping this hive will produce some honey this year, so am trying to keep it mostly intact. To discourage a swarm, I expanded the brood nest on March 17. I only had foundationless frames at the time, but I figured that would do just fine. I inserted one at the edge of the brood, and moved a mostly empty frame to the other edge. In theory this gives the bees something to do around the brood nest and takes their mind off swarming.

Speaking of frames, I attempted to order 50 medium frames and foundation from Brushy Mountain in March, with the goal of moving to all medium boxes this year. I say attempted because I mistakenly ordered 50 deep frames and 50 deep foundation. After my initial shock and dismay, a neighborly beekeeper (Karla) graciously offered to take them off my hands. As a result, the only frames I could find quickly were unassembled frames from Virginia Bee Supply. I was planning to avoid frame assembly this year, to no avail.

The frames are slowly coming together, and I supered Mars with a single medium box on March 21 (see prior pic).  I had the honey frame I removed a few days earlier when expanding the brood area, and also 7 frames with foundation. Again, the goal of adding a super is to give the bees something to do other than swarming.

We had some brief warmth last weekend and my helper G looked in the hives with me on April 2. The foundationless frame had been built out with mostly drone comb (of course!) as shown in the picture. Often the bees build brace comb between the boxes where they raise drones. The good news is that with actual drone comb in the hive they apparently don’t do this as much, as we didn’t see any during our inspection. I later realized that I could have removed and frozen this frame as mite control, since mites prefer drone cells over worker cells. That might (!) have been a good idea, I just didn’t think of it at the time.

This hive had the smallest amount of stores over the winter and yet did extremely well. I am restricting this hive to one deep box and one medium box in hopes of inducing swarm preparations. Last weekend G and I found this progressing rather well. We counted around 20 empty queen cups throughout the hive. The plan was to check the hive every week and split it into multiple hives once the queens are growing and before the cells are capped. The books say that the hive tends to swarm as soon as the queen cells are capped.

The small upside-down cups in this picture are queen cups. Eventually the queen will lay an egg in each cell as part of the hive’s swam preparations.

I say this was the plan, as unfortunately I am travelling the next 10 days. Today is April 9 and I will check the hive tomorrow if the weather holds. If there are filled queen cells, I may try to do something. If not, then perhaps the hive will swarm while I am gone. Don’t tell the neighbors…. I will let you know what happens.

I also checked this hive for mites on March 26, using the sugar shake method. Over the winter this hive always had more mites than Mars, so I figure this is the one to check. I used bees from the brood area, and found zero mites. Most likely the mites are low but not zero, and in fact a week later I did see a few dead mites on the screened bottom board. So I’m thinking the mite level is acceptable for now, and will check again at the end of the month.

My top bar hive is growing fast, with a good 12 or more frames of bees. Last weekend there were three queen cups on the edges of comb. This worries me a little as this hive did not have any queen cups last year, at least none that I found. There are only a few (without larva) so I’m hoping this is a potential supersedure rather than swarm preparations. I’ve been inserting empty bars into the hive to keep them busy, and they have built out three or four new frames so far. 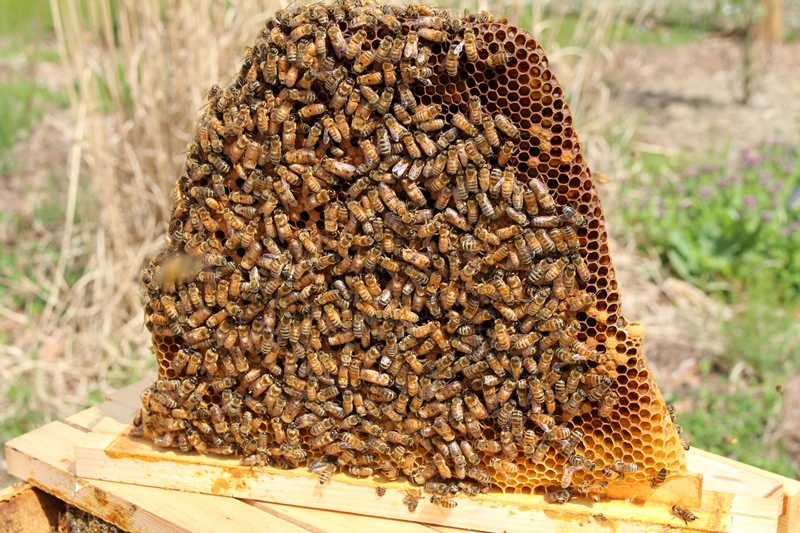 You can just make out a queen cup on the right side of this frame.

I also checked this hive for mites. As you may recall, I treated this hive last October when the mite count was 11.  This time I found four mites, which given a sample of about 300 bees is an acceptable level. A count above 8 or 9 (near 3%) is cause for concern, so will have to keep an eye on this.

I think this is a male carpenter bee on the henbit flowers in front of our hive Mars.

As I mentioned in a prior post, our early flowers bloomed about a month ahead of last year. I have updated my picture blog of bloom dates with some recent arrivals.

On April 1 the heady sent of cherry blossoms filled our side yard, and the bees were all over these flowers. The next morning while checking the hives I could hear and smell the bees fanning inside the hive. Once they reduce the moisture content in the nectar to around 18%, the bees will cap off the cells as honey.

Now, just over a week later, it is cold and wet outside. The cherry blossoms are faded and I wonder if the holly will even bloom. What began as a great early start for the bees has not worked out as well as I had expected. We’ll have to see what can bee accomplished in the coming weeks.

The busiest men have the most leisure

Those who have the most to do will find the most time. At least that is the sentiment behind the proverb behind today’s title. This comes from the book The Facts on File Dictionary of Proverbs. I also found this in A Dictionary of Proverbs (Oxford Quick Reference) on Google books. By these accounts, the quote first appeared in 1884 as part of the novel The Canon’s Ward by Mr. James Payn. The book, in turns out, is a three-volume series by Mr Payn, in case you are interested.

For our purposes, it seems appropriate to capture the idea of busy bees and a busy Erik. I don’t feel like I’ve had a lot of leisure time, though the bees certainly have had some today. They have been snug in their hives with cool temperatures and rain. The Montgomery County Police in nearby Maryland even put out a humorous press release yesterday asking for the public’s help in finding the missing Spring season. I’m looking forward to some warmer weather.

3 thoughts on “The busiest bees have the most leisure”