Our small water feature for the bees, consisting of a water lily and a few fish. The rug you see here is an old outdoor rug we no longer use that does a great job keeping the weeds down.

Our county ordinance requires that bee hives have water available within 50 feet. While this is good practice, of course, the bees have their own thoughts on the matter. Despite my work to set up a small water pond near our hives, the bees completely ignore it.

To be fair, the neighbor’s pond is bigger and better shaded. I’m sure their water is much better tasting as well.

In addition to discussing our water source, I have an update on our Langstroth hives to share, of the three steps forward, two steps back variety. An update of our top bar hive will appear in a future post.

Our little pond is made of a 30 gallon tub, with a water lily for landing pads and a half dozen fish to keep the mosquitoes down. I change out a buckets worth each week to remove some waste and replenish the air.

When we set up the hives in April the tub only held water, so perhaps this is why the bees initially ignored it. A few weeks later I picked up the water lily and three large (3-4 inch) goldfish to feast on what was sure to be a good supply of insect larva. I put them in the pond and planned to feed them once a day to augment their diet. 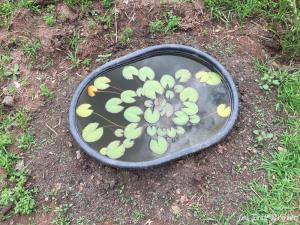 The bee pond on June 13. It is set into the ground to keep the water a bit cooler. The many lily pads here are from a single water lily plant.

A couple days later the fish were nowhere to be seen. Perhaps because of their size a raccoon or other animal found it worth their time for a small snack. We looked and looked, to no avail. I was a bit disappointed, as the fish were a little expense, but I stopped dropping food into the tub and resolved to find cheaper fish.

A week or so later I picked up two small goldfish and four minnows at our local PetSmart store. At 17 cents each, they could die in the heat or become a raccoon’s midnight snack for all I cared. I put them in the tub for round two of my pond experiment.

The next day I dropped some fish feed into the tub, and was happy to see the small fish rise to the surface. Much to my surprise, the three long-lost larger goldfish also appeared. For some reason they seemed very pleased to be fed. I mean really, those darn fish. No respect for being assumed dead and gone.

Since then a small goldfish and minnow have floated to the surface, perhaps from the heat, fighting over food or even old age. There should be seven fish left. The fish are doing well, and as you can see in the picture there are plenty of landing platforms should the bees ever become interested.

In the meantime, we’ve had a record number of 90+ degree days (Fahrenheit of course) for June, so I’m sure the bees are making many trips across the street for the good stuff. 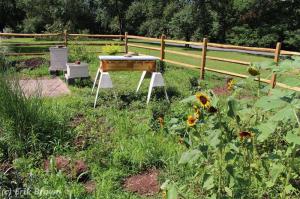 Sunflowers in the bee yard on June 21. I have seen sweat bees and bumble bees visiting these, but no honey bees. You can also see the many weeds I am cultivating around the hives as well.

Our Langstroth hives continue to perplex me. I’m not sure what to do with them at times, so I continue to make it up as I go. This past week was no exception.

You may recall that we lost the queen (somehow) in our middle hive, called Jupiter. We released a new queen on May 30, and since then the hive has been doing well. On June 21 there were four frames full of brood in this hive, so it is doing well.

Our other Lang, Mars, now seems to be struggling. In my check on June 21 there was a little brood but no larva. Could the queen have disappeared from this hive as well? My prior inspection (see Good Fences Make Good Bees) found a couple queen cups so I thought perhaps they were making a new queen. Now I’m not sure they succeeded.

Both hives were closed up at this point, but I decided  I really did not want to admit that I might need yet another new queen. So the only solution was to swap a frame from poor recovering Jupiter over to Mars.

Thus I took Mars apart again and found a frame with small larva. I still can’t seem to spot the eggs so hopefully there were some present. Not wanting to transfer the bees over, I brushed the bees off the Jupiter frame. The girls were not happy, buzzing everywhere, and I hope I didn’t damage any larva in the brushing process.

At this point it occurred to me that when moving a brood frame, you should really prepare the target location first so when the frame is ready it has a place to go. Oops. I set the frame aside, hoping the larva would survive a few minutes in the heat, and turned to work on Mars.

Mars has two mediums on top, which I removed, and found an empty frame in the bottom deep box. Once again I brushed off the bees, much to their dismay, and set the frame aside. I placed Jupiter’s brood frame into Mars to allow them to make a new queen if they need it.

The empty frame went into the blank spot in Jupiter, and they were good to go. I was sorry to steal bees from Jupiter as this hive has been recovering well. July starts next week so we may have a summer dearth coming. I suspect I’ll need to start feeding both hives again soon if I want them to be ready for winter.

That catches us up to about a week ago. I checked our Top Bar Hive (Venus) this past Wednesday, and will save the update for a separate post. Here’s hoping Mars and Jupiter sort themselves out.

“You can lead a horse to water, but you can’t make him drink” is perhaps the oldest English proverb still in use. According to the U.K. phrase finder site, it dates to an 1175 version found in the book Old English Homilies and appears in various forms throughout the centuries.

As a child, I remember our perhaps not-so-clever response to “You can lead a horse to water, but you can’t make him drink.” We use to gleefully add “though you can stick his head under til he drowns.” I’m not sure where that one came from, and I’m sure it is not recommended (for horses or for bees).

I saw Rusty’s post about creating a salt water source recently on Honey Bee Suite, which inspired me to finally share this post on my water source. Perhaps I’ll give Rusty’s water dish a try to see if it fares any better than my little pond.

5 thoughts on “You can lead a bee to water”