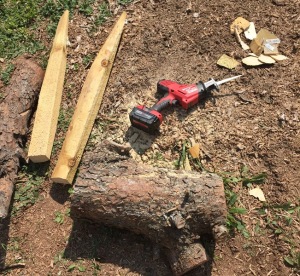 A shout out to my blogging buddies The Prospect of Bees for inspiring my recent purchase of a Milwaukee M18 reciprocating saw, shown here surrounded by pieces of fence rails. Prospect’s recent infomercial of a post on the 12-volt version of this saw inspired some research and an eventual purchase. Since this is my first and likely only cordless saw, I settled on the 18-volt version, finding a special online deal from Home Depot that included the complete kit (saw, charger, battery) as well as an extra battery.

If you’ve been following along here, you know I started this project last fall. See my April post Bee! I’m Expecting You for the historical photos. While I have one more fence section to finish, and would like to add some wire mesh to discourage visits from critters, I finally feel like I have a proper area for the hives. Happy Day!

My apiary fence after my work this past weekend (Jun 7) as a result of my new saw. Looking good!

The fence encloses a roughly 30 by 30 foot apiary (around 9 meters square) of our side yard, with an open section for a future 4-foot gate. The side shown in the photo faces our street. You can see the two shorter 8-foot sections I created instead of using a regular 11-foot rail with a smaller 5-foot section. I like the symmetrical look they give the fence, though I might have reconsidered had I know the effort and time required to trim the ends of six 8-foot rails to fit the fence post holes; let’s just say I definitely needed that second battery. The result looks awesome, if I may say so.

The area is planted with shrubs for bees and other pollinators along with a small fish pond for water. I’ve been meaning to share the design here, but will save this for a future post. Unfortunately the bees prefer the neighbor’s pond across the street over mine, but both the neighbors and the bees don’t seem to mind so I guess it’s okay.

Inside the fince, I checked the two Langstroth boxes this weekend. Last we saw, the one we call Mars was going strong and the other we call Jupiter had lost her queen.

I’m happy to report that Jupiter’s new queen is laying. I looked inside enough to find a meager four frames of bees, and on two of these saw a nice pattern of brood. I closed it up to let the queen continue settling in and the bees emerge. The new queen Eponine likely started laying around June 1, so the new workers should appear around June 21. Hopefully the existing bees will hold out until then so the hive can recover.

As for Mars, I found lots of bees and 7 frames of brood across the three boxes (one deep and two mediums). That’s the good news. I didn’t see any larva or eggs, however, so that’s the bad news. Our weather was rather cold the prior week, so perhaps the queen stopped laying for a spell?  I just don’t know.

As I removed the middle box on Mars, some comb separated and I did see some large larva above the bottom box (I figured it was drone comb at the time). I left the larva there and took some broken comb out. In this middle box I also saw what looked to be two capped queen cells. I’m not sure what the hive is doing, perhaps replacing the queen or hedging their bets? At times like this I know I am quite the novice beekeeper.

Later, I noticed the wax piece I removed contained a white substance. A brief Internet search showed this to be royal jelly. Only queen bees get loaded up with royal jelly, so I think poor Jupiter had four capped queen cells and I ripped two of them apart. So now I don’t know what they are doing. There were lots of bees, about 16 frames total, so I can’t imagine they’ve already swarmed. We have enough land and trees and neighbors around that I think we’d see or hear about a swarm if it did occur. Of course, I can’t be certain.

With so few queen cups (only two now!) and no larva to be seen, I think the best course is to let the bees work it out. So we’ll give them a couple weeks and see what happens.

Still, you have to admit the fence looks good!

Our title is based on the quote “Good fences make good neighbors,” made famous in Robert Frost’s 1914 poem Mending Wall. In the poem, two neighbors rebuild the stone wall between their fields. While one neighbor wonders why there is a fence, the other simply says “Good fences make good neighbors.”  According to the UK Phrase Finder site, the quote dates back to a 17th century proverb.

Whether a good fence actually makes for good bees, we’ll have to wait and see.