Our weather has been unusually warm this fall. Last weekend we hit 80 F (26 C) and we have yet to experience a frost in our little piece of Virginia. We might see one this weekend, with temperatures expected to drop 30 F this Halloween night.

A panoramic of my apiary on October 26, 2019. The two hive stands are actually perpendicular to each other. ©Erik Brown

I now have seven hives going into winter. At one point I thought I would have nine, though my strong hives had other ideas. I had two somewhat weak hives, but thought I could nurse them through the winter. However, while feeding them along with my other hives they were both robbed out and that was the end of that.

One hive in particular I was sad to lose: a swarm that had moved into a top bar hive back in May. I had carefully moved it across the yard a few feet at a time all summer long. I may have focus more on moving it and less on inspections, as an inspection of the dead combs showed some evidence of mite problems. So that may have contributed to their early demise as well.

The good news is that I believe my seven remaining hives are fairly well fed, as the warmer weather has permitted some additional feeding. The feeders are still on, actually, and they all have foam insulation under the cover to keep moisture away from the cluster. There is a three-story medium nuc (the second from the left) that I want to insulate better  this weekend.

Here are some photos of moving the swarm across the yard, ultimately to no avail.

A swarm moved into this hive in early May, on the patio near our fire pit. It had 3-4 old combs, some of them a little moldy, but the bees didn’t seem to mind. This is May 4, 2019. The blue tarp served as a fine summer cover so I left it there. ©Erik Brown 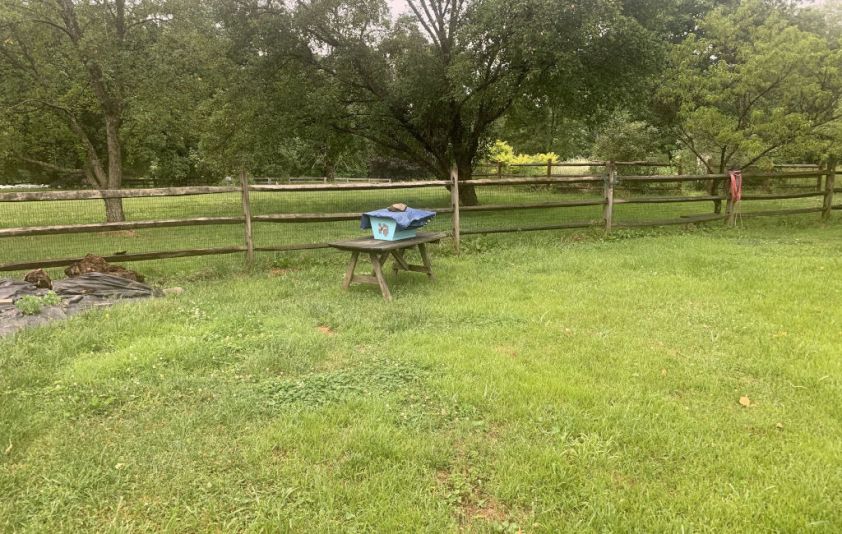 By May 30 I had moved the hive near the fence (which you can see in the prior photo). The fence in the background is my apiary. ©Erik Brown

It wasn’t until August 11 that I was finally brave enough to move the hive beyond the fence, with the confused bees hovering until they figured out where to find their entrance. You can see the fire pit where it started in the background. ©Erik Brown 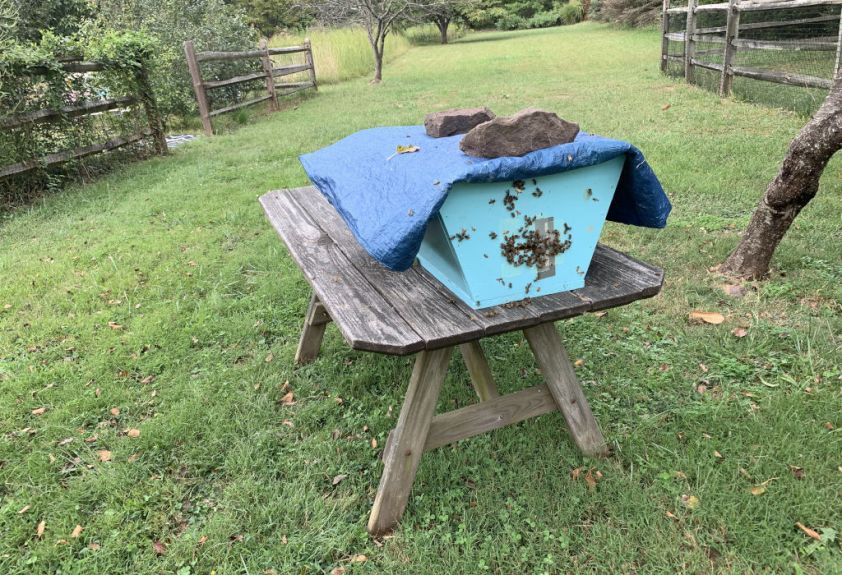 The hive made it nearly to my apiary until September 17, 2019 when I found way too much activity at the entrance. By this time the colony was overrun and the bees were finishing their dastardly deed. ©Erik Brown

Great trees keep down little ones

I had not heard of this saying before I found it in my favorite proverbs book. Apparently this represents the idea that important or popular people, companies, or even nations prevent less well-known individuals, companies, or nations from gaining recognition. According to my reference, the proverb first appear in the 1642 book The Holy State and the Profane State by Thomas Fuller.

Given that my big (great) hives robbed out the little ones, it somehow seemed appropriate.