Winter….. Snow, cold, and wind….. The bees cluster in their hives and beekeepers keep watch, read a few beekeeping books, and prepare for spring. As we near the winter solstice, this seems like a good time for a status update on my six hives. So here it is.

My hives consist of three Langstroth hives (Mars, Ganymede, Callisto) and three top bar hives (Saturn, Titan, Venus), all named after planets and moons. Two of my Langs have a screened bottom board (Mars and Callisto) and one of my top bar hives (Venus) has a viewing window. Rather than discuss each hive separately I will give an update based on activities. 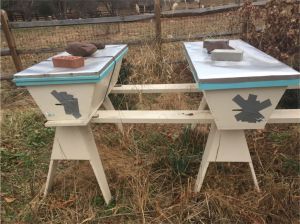 My prior post showed the sugar boards I placed on top of my Langstroth hives. The top bar hives are on their own, and I think (hope?) they have enough stores for the winter. As you can see I reduce the entrances with duct tape to protect from wind and cold. Titan, in fact, propolised the entrance nearly shut; there are three small bee-sized holes through the propolis cover at the back of Titan’s entrance.

The only other winter prep I do is to cover the tops with foam insulation. This helps keep some of the heat generated by the bees inside, and encourages any condensation to form on the inside walls rather than above the cluster.

A screened bottom board, if your winter climate permits it, provides an easy way to check for both mites and cluster size. Once a week or so I look at my two bottom boards to count the mites and judge the cluster size. Mites falling on a bottom board gives an estimate of mite infestation, rather than a true measure. For my hives, under 5 mites per day seems to be pretty low, 5-10 per day is cause for concern, and 10+ mites per day is a solid infestation.

Mars has been ultra low, in the 0 to 2 per day range. Callisto has been a concern, consistently in the 10 to 15 dropped mites per day range. My last actual measurement, in October, had Mars at 2% (2 mites per 100 bees) and Callisto at over 8% (8.3 mites per 100 bees). I treated Mars with a single MAQS (formic acid on a mite away quick strip) and Callisto with two MAQS as the cold weather arrived. With such a high mite load, as it is called, Callisto may have trouble making it into spring.

As to the cluster, the size of the debris on the bottom board gives an estimate of cluster size.  Mars has been small, covering perhaps 1/6 to 1/8 of the bottom board. While Mars is fine on mites, she may not have enough bees to last until spring. Recently the debris for Mars seems a bit stronger, so perhaps they will pull through. I wonder if the formic acid I applied (in the MAQS) affected the queen. 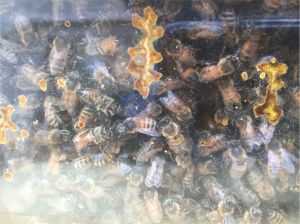 Not the best picture, this shows the bees in Venus through the viewing window. ©Erik Brown

The cluster in Callisto has been fine, perhaps 1/3 of the bottom board, so on this front Callisto seems fine. I also did something for the mites today, which I will share in a moment.

The viewing window on Venus is covered and insulated, and I open it up to view the cluster occasionally. Venus has a small cluster about four bars long. This seems small to me, so we will see how she does. The hive also had a high mite load (over 13%). I treated her with two MAQS, but suspect Venus continues to have a lot of mites, similar to Callisto.

Today it was cold enough (near freezing) in the morning for the bees to cluster, yet expected to be somewhat warm in the afternoon (near 50 F) to make it easier to warm the hive. A good day for an oxalic acid dribble in an attempt to knock back the mites. Based on my last measurement, only Callisto and Venus had high mite loads; the other hives were well under the 2% threshold. So I only treated these two hives.

A digital scale is needed to accurately measure the oxalic acid.  ©Erik Brown

Oxalic acid (OA) is the strongest organic acid produced in nature. The sour taste in rhubarb is OA, and a number of plants produce OA to discourage pests. There is even an Oxalis genus of plants, which includes the plant wood sorrel. Since OA is prominent in nature, honey bees have a natural resistance to it.

Varroa mites, on the other hand, are very susceptible to oxalic acid. I purchased some fairly pure OA powder last year. With this concentration of acid, a winter treatment for bees can be made from 8g OA, 200g sugar, and 200ml water. The site scientificbeekeeping.com has detailed discussions of the science and usage of oxalic acid, if you are interested.

The single Callisto bee that climbed up to investigate. ©Erik Brown

To treat, open the hives and dribble 5 ml of the OA mixture in each seam of bees. Don’t break apart the boxes, just dribble some liquid in from the top. A Langstroth hive is fairly easy, as you take off the top and dribble 5 ml between each frame. In Callisto, the bees were down in the second box, which is a good (it means they still have honey stores above). It was 40 F outside, so the bees stayed in the cluster.

Treating a top bar hive is a little harder, since the bars are flush and propolised together. I pull a bar out at the back of the hive and then pry a small opening between each pair of top bars to dribble in the OA mixture. If the opening is too large the bees will climb up, which I prefer to avoid. The viewing window helps by letting me see exactly where the cluster is located.

A picture of me leaning over the tub. You can see the orange goldfish and the larger blue-purple one above it. ©Erik Brown

Last, but not least, is to keep an eye on the fish. I put three large goldfish in an 18 gallon tub in the spring of 2015, and I am surprised two of them are still alive and swimming. I place a horse trough heater in the tub during the winter to prevent freezing, and change or add some fresh water to replenish oxygen supplies every few weeks. Fortunately, we have well water so can add water straight from our top. Today I added two buckets as the water level was a bit low. I don’t feed them unless the temperature hits well above 50 F. It typically does this a few times each winter.

This line from Shakespeare’s MacBeth was the inspiration for this post. As I was mixing oxalic acid with water and sugar, this line said by the three witches in the play came to mind. They gather around a cauldron in Act 4 to make a potion and share prophesies for the future.

Other than the obvious reference to mixing chemicals, I liked the idea of replacing “double” with “dribble.” Adding the reference to mites and bees was a little awkward, though it works. The use of oxalic acid in winter certainly does help foil the mites, even though it causes the bees a little trouble.

One thought on “Dribble, dribble, foil mites and trouble bees”