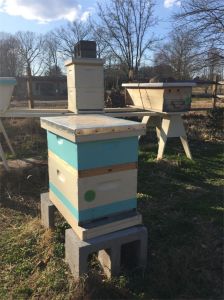 ell, it’s official, or at least I am official. After an inspection this past week, I am legally permitted to sell bees in the state of Virginia. I have the stickers to prove it.

In our weather, we had three days over 70 F (21 C) this past week, and the hives are starting to raise brood in earnest to prepare for springtime.

The photo here shows Mars reduced to one medium with some extra stores on top, with Ganymede (the Lang) and Venus (the top bar) in the back. 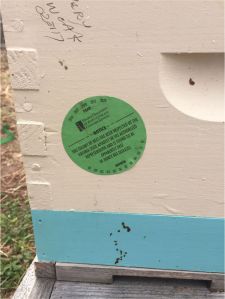 I am hoping to raise and sell a few nucleus hives this year, including some top bar nucs. Virginia law requires an apiary inspection every year to certify that your hives are free of disease. I wrote our local Virginia inspector Bob Wellemeyer in January and he sent me a note the morning of February 21 saying he would be there that day. I didn’t get the email until later so I missed him entirely. He checked the hives and wrote me an email that the hives looked fine although one of them was weak.

The next day I found a green sticker on each hive certifying that the hive had been “inspected by the Virginia state apiarist” and “found to be apparently free of honey bee diseases.” He must have looked through each hive, something I have been reluctant to do in our cool weather. He consolidated the weak hive (Mars) down to a single box, which hopefully gives them a better chance of survival.

So, it’s official! I can sell bees in the state of Virginia.

As to my hives, the inspector’s report sums it up. Looking good, though Mars is pretty weak. With our warm weather, I can see just how weak Mars is by the lack of entrance activity. Very few bees coming in and out, especially compared with the busy entrances at the other hives.

Mars swarmed at least twice last year, so that might be partly why the population is so low. The inspector consolidated the hive to a single medium box, with some sugar cakes and inner cover directly above and the two other medium boxes above that. I removed the top box yesterday, as you can see in the photo at the top of this post, and found plenty of honey available. So the hive’s survival depends on whether there are enough bees to keep the cluster warm and raise new brood in the coming weeks. Our recent temperatures have probably helped.

While I was suited up, I also peered in Saturn. This top bar hive started from a swarm last April and has been both productive and gentle. I am hoping to raise queens from her this year. The bees were pretty calm even when I pulled out the brood comb shown here. I saw at least three combs with capped brood, so the population is going to grow pretty quickly in the next few weeks. 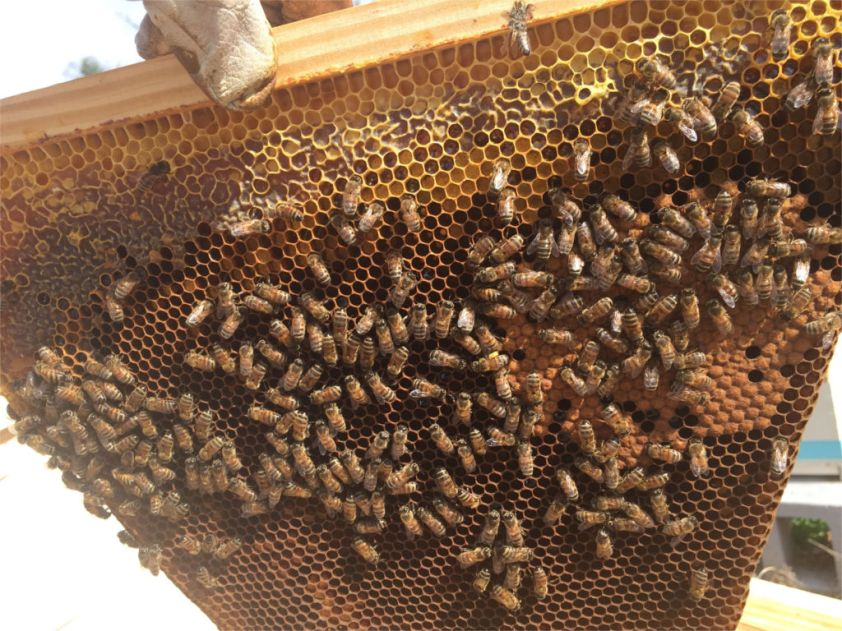 A brood comb from Saturn on February 25, 2017. A band of honey is across the top, with a circle of capped brood on the right (the sunnt side) where the cluster likely forms. A bee carrying pollen can be seen to the left of the capped brood. ©Erik Brown

Every land has its own law

This proverb captures the notion that the rules change in each region, and a traveler is well advised to know the local expectations before or as part of a visit. This was likely more true in ye olden days when the laws did indeed change based on the local ruler. It remains good advice for anyone visiting certain countries in Africa or Asia that may have different expectations of courtesy or behavior than the United States and other western nations; and corresponding local laws to match. The saying appears in my Dictionary of Proverbs, which says it is of Scottish origin from before 1628.

The notion seems well suited to bee hives as well. Different hives have different conditions, and the beekeeper benefits from knowing ahead of time. I try to avoid using smoke in my top bar hives because the bees seem to behave well without it. Ganymede, meanwhile, is often more aggressive so I inspect it last since otherwise these bees would bother me while inspecting the other hives. Or now, coming into spring, the behavior of a weak hive is very different than a strong one. It is an interesting notion, and I was pleased to find a proverb that captures the thought.

Not to mention the legal aspect of having an official state inspection, of course. Green stickers, all around.

May you prosper and find honey!

2 thoughts on “Every hive has its own law”