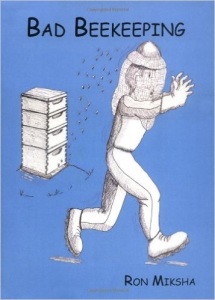 Continuing with the winter theme, another recent read was Ron Miksha’s book Bad Beekeeping. Miksha maintains a blog of a similar name for sharing his thoughts on the world of bees and beekeeping. He mentioned the book in a post so I thought I would pick up a copy in support of his ongoing efforts. Here is a short review.

When the book arrived in the mail, it was bigger and longer than I expected with pictures in black and white. It made me wonder what kind of beekeeping book this might be, and I wasn’t sure how much time I wanted to spend slogging through the text.

Of course, I read the entire book in about a week. Bad Beekeeping is not a book about keeping bees; rather it is a memoir of Miksha’s life as a migratory beekeeper. He grew up in a Pennsylvania farm where his father, among other things, kept bees. Ron struck out on his own in the 1970’s, and kept millions of bees some thousands of miles apart, from the swamps in Florida to the prairies in Saskatchewan.

Along the way, Miksha sprinkles in some beekeeping history and bee facts, as well as a bit of beekeeping politics. In the 1970’s, there were few import restrictions between the U.S. and Canada, and no varroa mites to be found in North America. Today, U.S. bees are not easily imported into Canada, and varroa is the bane of beekeepers everywhere. (Of course, honey bees fly across the Canadian border just fine, with no help from land-bound humans.)

I enjoyed the diversions into history and politics, and Miksha relegates expanded details to the back of the book. So the references and in-depth info does not clutter the flow of text, yet is there for the reader to delve into. Sometimes I did, sometimes I did not.

There is a singular focus on Miksha’s personal life and activities. We don’t hear too many details about the other characters in the story, including Miksha’s wife, except as they relate to the ongoing narrative of Miksha building and managing his beekeeping business.

The idea of bad beekeeping shows up in a couple ways. Beekeepers in Canada are surprised at how little honey beekeepers in Florida produce, and figure Florida beekeepers must not be very good. Similarly, beekeepers in Florida can’t understand why so many Saskatchewan hives fail in the winter, which must be the result of poor beekeeping. It is a funny way to say that the local environment has a big impact on bees. Saskatchewan hives produce high honey yields because of the abundance of nectar in the summer (when it rains enough), while Florida hives survive better (in the 1970’s) because it is warmer.

The other way the title appears, as you might guess, is in Miksha’s view of his work. He claims to overcome his lack of beekeeping talent with hard work, and he does indeed work very hard. He seems quite the good beekeeper, in my humble opinion, and had success for many years across multiple locations. Like any farming, the weather and the pests have a big impact on his livelihood and this is apparent in the book as well.

I won’t spoil the story for you, other than to say that Miksha became a Canadian citizen years ago and continues to live in Canada. He writes much better than I so you should definitely check out his blog.

I went looking for a proverb with the word “bad” in it and discovered this one on the Historically Speaking blog. The saying captures the notion that continuing to spend more and more money on a failing endeavor is not worth it.

According to my Facts of File Dictionary of Proverbs, this saying first appeared in 1706 in J. Steven’s “A New Spanish and English Dictionary.” The Historically Speaking site, however, traces this back a bit further, to Giovanni Torriano’s text “Italian Proverbial Phrases” published in 1662. Apparently people have been spending money on bad ideas for a while.

I have found that it is pretty easy to spend money on beekeeping equipment and gadgets, regardless of your skill as a beekeeper. Our choices make us who we are in the end, and so we are all throwing good money after something one way or another. That, and the proverb has the word “bad” in it, so it fit the book I was trying to review. Reason enough to use it.

This being December 23, I wish you and yours the happiest of holidays. Enjoy the season!