Our local bee club hosted Dr. Meghan Milbrath yesterday. It was free event open to the public and we had some 80 to 100 people show up. Dr. Milbrath spoke on the topic of “Towards Treatment Free” and I thought I would provide a brief summary. 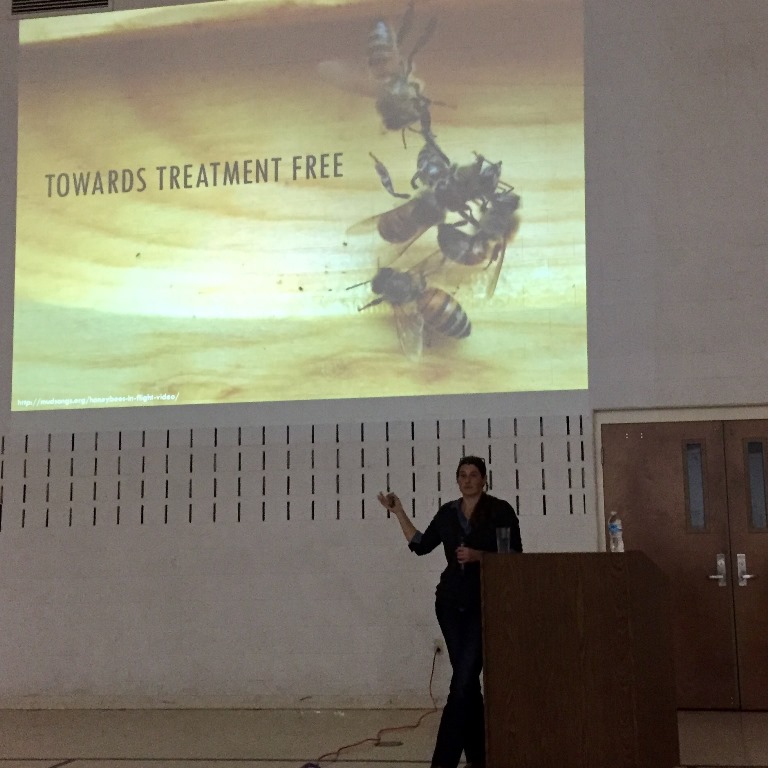 Dr. Milbrath at the start of her talk. © Erik Brown

When Dr. Milbrath started keeping bees in 1993, roughly 20 years ago, she adopted the so-called Bond Method for avoiding chemicals in her hives. The approach is based on the movie Live and Let Die. You start with 30 or so hives, select your most resistant hives every year, and produce new queens from them. Eventually you’ll have bees that are resistant to varroa mites. At least that was the theory.

After one year, she found that many of her hives were very sick. She grew up on a farm, and her family’s philosophy had always been to take care of their animals. Letting animals suffer and die was not in her nature. In fact, Milbrath pointed out that USDA regulations for organic farming requires that farmers do everything possible to care for their animals, even if it risks their organic status.

So she sought a way to better manage her hives and varroa mites, and this has been the basis of her research. As she says, every beekeeper would like to be treatment free. Milbrath has been active in the beekeeping community and earned her PhD from the Department of Environmental Health Sciences in 2003. After the introduction, her talk broke down into two parts: what is the problem, and what should we do about it.

What is the problem?

Varroa mites present two fundamental issues. First, once a hive has varroa mites it will likely fail in 1-3 years without some intervention by a beekeeper; and second, a failing hive puts both area beehives as well as wild bees at risk. Varroa has been found on wild bee populations, including social bees like bumble bees. The exact impact on wild bees is not yet know.

The real problem with varroa, Dr. Milbrath argues, is not the mites themselves but the viruses they carry. She likened the problem to malaria, dengue fever, West Nile virus, and Zika, which are transmitted by mosquitoes in a similar way. The most serious virus carried by varroa mites is Deformed Wing Virus, or DWV.

This is a common scientific concept: a three-way relationship between a host for a virus (bees / people), a vector (varroa / mosquito), and a pathogen (DWV / Zika). We are unable to treat the pathogen, so we go after the vector for the disease: the mosquito and the varroa mite in our examples.

In the end Dr. Milbrath’s solution is two-fold:

What should we do?

According to Dr. Milbrath, what you do depends on your specific hive. She advocates monitoring mites levels, and only taking action when necessary. Mite levels below a 3% threshold, measured as 9 or fewer mites per 300 bees, seem to be generally okay. Above this level, the bees and the hive are in trouble.

Above the threshold, she prefers organic treatments such as formic acid, oxalic acid, or apiguard. These are naturally occurring substances that leave little or no residues in the wax.

The point, Dr. Milbrath says, is to take action to keep your bees alive.

Dr. Milbrath’s long-term strategy is to seek a genetic advantages for honey bees. Seek queens that are bred to resist mites, and create new hives and queens from your best hives each year. If a hive has high mite levels, then replace the queen.

Her goal is for all beekeepers to have a strategy for dealing with mites, whatever that might be. She created a web site called northernbeenetwork.org to allow beekeepers to search for local producers of queens or nucs. This site was featured in American Bee Journal in 2014. By using local queens resistant to varroa, and evolving those queens over time, we should enable bees to keep the varroa mites below the threshold levels on their own.

It was a good talk, and makes me feel a little guilty for not checking my mite levels more frequently this year. Perhaps I will do so next year.

Walter Mitty, the undefeated, inscrutable to the last

Our quote for today comes from the short story The Secret Life of Walter Mitty by James Thurber. The story appeared in The New Yorker on March 18, 1939 and presents a man shopping with his wife and daydreaming about exploits as a Navy pilot, a surgeon, an assassin, and a Royal Air Force pilot.

I found this quote in a new book I picked up in Ithaca, New York at the famous Book Sale recently: The Oxford Dictionary of Modern Quotations. It has the following James Thurber quote on page 216: “Then, with that faint fleeting smile playing about his lips, he faced the firing squad; erect and motionless, proud and disdainful, Walter Mitty, the undefeated, inscrutable to the last.”

I was looking for quotes in this book with might, mighty, mite, and other words this evening. Then I found this one under the word Mitty. Given that varroa mites remain undefeated and are somewhat inscrutable, it seemed appropriate.

2 thoughts on “Varroa Mitey, the undefeated, inscrutable to the last”