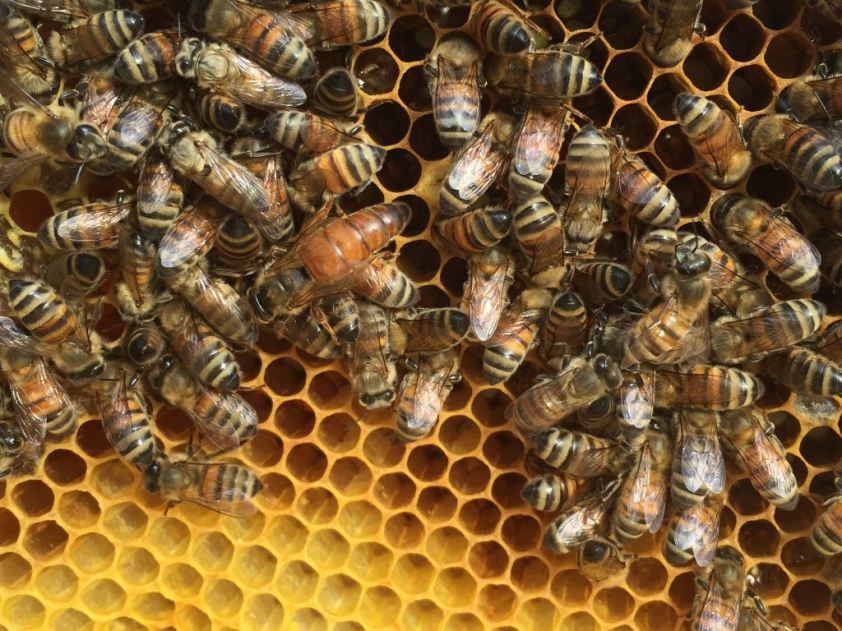 As you may recall, I two top bar hives. My original TBH I purchased last year, which has 14 inch top bars and has overwintered. Then I caught a swarm in a new TBH my dad and I built, which has 19 inch top bars. Thus both are top bar hives, but they are somewhat incompatible. Here is an update of their status.

This hive lost her queen in April, and received a new queen on May 30. There is an observation window on the side, and when the queen was added only a few bars of bees remained. This morning was fairly cool and I could see about five full bars of bees through the window.

At the end of July, Venus had very little honey stores and I suspect she might not have made it through our fall, let alone a cold winter. So I started feeding her 1:1 sugar syrup. I know I should switch to a thicker 2:1 syrup soon (2 parts sugar, 1 part water). The 1:1 is easy to make with hot tap water, while 2:1 syrup requires a stove and more time. So I’ve been using 1:1.

So far Venus has sucked down 6 quarts of syrup and seems happier for it. On August 28 I found 17 built combs (on around 30 total top bars). Of these, five were empty comb in the back, five full of nectar (mostly sugar syrup, I presume) in the middle, and five brood combs in the front. The first two combs had a little honey and not much else. I suspect the bees are using these two combs as a staging area and buffer from the wind.

She’ll need more stores, I suspect, to make it through the winter. Natural honey is better, but I don’t have any, so sugar syrup will have to do for now.

This hive started from a swarm on April 25, and has done great every since. Today I saw the queen for the very first time (yay me!), shown in the picture at the start of this post. She looks nice and plumb, if I may say so.

Yesterday (Sept 4) I did a full inspection and found a gentle hive bursting with bees. Each Saturn comb is nearly twice the total area of a Venus comb, and there were 15 frames built out. The front two hold a little honey, as in Venus, and the back one is a partial comb. In the other 12 combs, there are two pollen frames, six brood frames, three mixed frames with brood/honey/nectar, and one honey/nectar frame.

All told, a lot of bees already present with a lot more on the way. So I suspect there is not enough honey to support the population through the winter, especially if we have a dry fall (meaning there won’t be much nectar to collect).

As a result, I fed this hive for the first time today. I will save that story for my next post.

There is always room at the top

This expression is attributed to Daniel Webster, an American statesmen in the 19th century. The story goes that he was advised not to become a lawyer because the profession was crowded, and he replied with this quote. According to my Facts on File book of proverbs, the phrase became popular after John Braine’s 1957 novel Room at the Top. The book was made into an Academy Award winning film in 1959, and was remade as a television miniseries in 2012 by the BBC.

As for me, I just liked the phrase, and it has the word “top” in it. In my top bar hives, at least, there always seems to be some room available.