Most parents worry about their kids. When my oldest daughter was four I asked my father when you stop worrying about your children. He replied that you never do. It made me pause.

As well, apparently, with a small bee yard. Although perhaps the possibilities are not quite so dire, you still worry. Is the queen well? Will the hive swarm? Do they have enough food? In recent weeks I have worried that four of my now five hives might not have a viable queen. The bees, to their credit, are teaching me patience.

As you may recall, my original three hives have grown to five this year. On Saturday I was determined to make sure each hive either had a queen or young larva (from which they would raise a queen). I hadn’t seen brood in Mars, Jupiter, or Venus for weeks, and Ganymede was in question as well. So I worried. Did I wait too long to add a queen? Could there be laying workers? Is there enough nectar flow for them to prepare for winter?

That morning I visited nearby beekeeper and Russian breeder Chris Hewitt to obtain a new queen, as I figured at least one hive would need her. With the queen cage in my jacket pocket, I set out for the bee yard.

Ganymede on Friday with a full beard.

I started with Ganymede, the hive I split from Jupiter this spring. It did so well that I split it again two weeks ago. Now my concern was that the split, a nuc I had given to my bee mentor from last year, might have taken the queen with it. The hive was a single deep full of bees, and I mean really full. So many bees that it was almost a little scary for a second-year beekeeper.

Fortunately, I found some larva on a frame, which means the queen was in the hive in the past week. So yay! The hive has a queen.

I had to do something about the crowded conditions, so after I inspected Mars I moved the deep box from Mars onto Ganymede. After the upgrade, Ganymede’s bees seemed a bit more content. Exploring the addition to their home, I am sure.

My plan was for Mars to produce honey this year, and it was booming in April and I had built it up to five boxes: one deep and four mediums. After measuring a high mite count on April 24, I treated the hive with a single MAQS strip. With a single strip, essentially a half-dose, I figured the queen would be fine. Well, I’m not sure she was. Since this treatment I hadn’t found any brood. Perhaps I shouldn’t have treated, as the bees were building up and would likely outpace the mites this time of year. 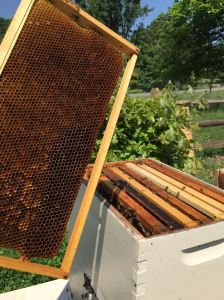 At the same time, the weather turned cold and damp in early May, and Russian bees are known to ramp down in cold weather. Either way, my patience paid off, as I was pleasantly surprised to find larva and capped brood in the second box. I pulled out the first box, a deep, which seemed mostly full of pollen and nectar, and inserted a slatted rack in its place.

It took some work to convince myself that the queen was not in the removed deep box. Once I did, I shook each frame out in front their hive (Mars), and created a second box for Ganymede. The frames are a bit old and crusty, as you can see in the photo here. Hopefully the bees won’t mind and will make good use of the new space.

On a roll now, I opened up Jupiter. The hive is definitely low on bees, though once again I found larva and capped brood. Just a small patch, enough to know a laying queen is present. The hive swarmed on April 25, and I was worried that after four weeks the queen had not successfully mated.

I should have been more patient. A week for the queen to emerge from her capped cell, a few days for the queen to mature enough to mate, then some mating flights in the midst of our cold, cloudy, rainy weather. A number of beekeepers say that a new queen will start laying in as little as a week or up to a month. With the weather we had, she was fortunate to get mated, so we’ll have to see how strong she is as the hive builds up.

This hive holds the swarm from Jupiter, and her bees were busy bringing in nectar and pollen yesterday. I decided not to bother them, as I had verified a queen was present previously. I will do an inspection sometime soon. 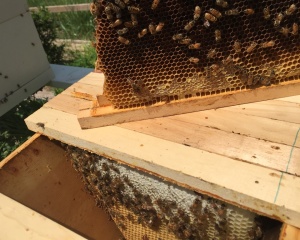 My quick check on Venus Friday had not found any brood. Yesterday I did a careful frame-by-frame inspection to make sure there were no signs of a queen. Most of the combs had honey at the top, and nectar, pollen, or empty cells beneath, almost like they were preparing for winter (see the picture here). No brood that I could find.

I did find three queen cells, though I suspect they died in the cold. They were away from where the bees normally cluster, and I saw at least one of these two weeks earlier. I removed them just to be sure and inserted the new queen cage. I’ll give the bees a couple days to get used to her, then remove the pink cap so they can eat through the candy and release her. 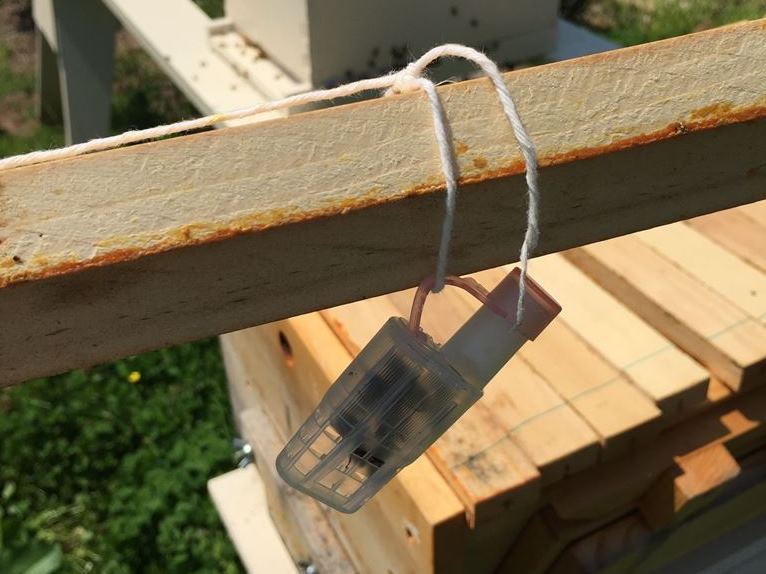 The new queen. I tied her to a top bar as shown here, and inserted her between the third and fifth comb.

When the new queen starts laying, all my queens will be based on Chris’ Russian bees. They seem to handle the mites and the cold reasonable well so far, so no complaints.

Everybody wants to rule the world

This 1985 song by Tears For Fears seems an appropriate title for a beekeeper trying to make sure every hive has a queen. Not that the queen rules the hive, mind you; research shows that the worker bees tend to direct the hive’s actions. A true collective. So does that make the title more or less appropriate?

Either way, I am in the pleasant position of knowing that my hives are queenright, meaning they have a laying queen. I will have to find something new to worry about, presuming Venus accepts the new queen of course.

5 thoughts on “Everybody wants to rule the hive”