I was fortunate to be home when our hive Jupiter swarmed on April 25. I managed to wrestle the bees into a new top bar hive and set them up in my apiary. This weekend was nearly two weeks later, and I was anxious to take a close look to see how they were faring.

I built this hive with my father’s help in January, so it felt good to put some bees inside. A week ago I peeked just enough to make sure that the bees were busy building comb, and indeed they were. Yesterday, on May 8, I took a more thorough look to see if the queen was laying.

In the back of the hive was a pint of sugar syrup. The weather has been rather cold and rainy, and I didn’t want the bees to starve, so I placed this as emergency food. I was pleased to see the syrup was hardly touched, meaning the bees are happy with their external food choices.

In the front of the hive I found six bars with nice, straight comb. The number of bees seemed smaller than I recall in the original swarm. I wonder if some of the swarm returned to the original hive, especially after I moved the top bar hive from under the tree into its current spot in the apiary. Either way, given the bees stayed, there should be queen a present. 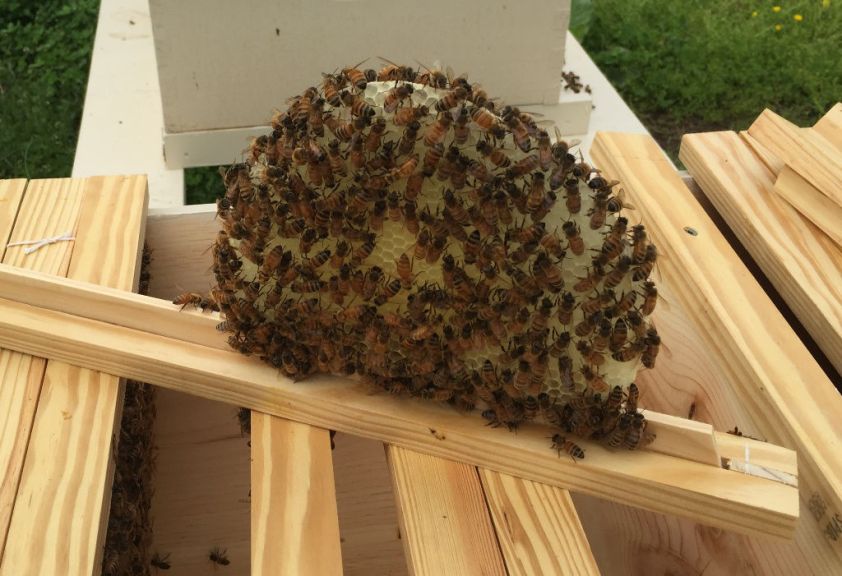 I looked over the combs and found nectar and a little pollen. No eggs that I could see, no larva, no brood. I had really expected to find a laying queen, as I assumed the original queen from Jupiter had moved with the swarm. If she had, then she would already be laying. Either she died somehow, and the hive has no queen, or the swarm had a virgin queen. I’m not sure where the original queen might be, perhaps still in Jupiter?

Assuming the swarm had a virgin queen, she would have to make one or more mating flights before she could start laying eggs. With our recent rain, this could have been difficult. That might explain the delay, or the queen could have been eaten or killed during her flights, you never know. At this point, nothing to do except wait another week and check again.

If the hive is still broodless after nearly three weeks, then it probably doesn’t have a viable queen. In that case I will have to intervene, though exactly how I am not sure. Stay tuned.

Home is where you hang your hat

Today’s proverb captures the idea that home is where you want it to be, and not bound to some sentimental location or purpose. Where you are at this moment, where you hang your coat or hat, is home. According to my Facts on File Dictionary of Proverbs, this quote first appeared in the mystery novel The Green Rope by J. S. Fletcher, published in 1927.

Given that bees give up their old hive when they swarm, this seems especially appropriate. The colony’s home is where they build their comb. I just hope they have a queen to go with it.

6 thoughts on “Home is where you hang your comb”