This is the first of two posts about the VSBA 2015 Fall Meeting. See my prior post for a short summary of the meeting. This  post is about the two talks given by Dr. David Tarpy on queen quality and the bee testing clinic at the North Carolina State University (NCSU).

Dr. Tarpy is Professor and Extension Apiculturist of Entomology at NSCU, specializing in honey bee biology and beekeeping. He received his Ph.D. from the University of California at Davis under Rob Page, and a postdoctoral fellowship at Cornell University under Tom Seeley. He joined NCSU in 2003 and is active in the North Carolina beekeepers association.

His first talk was about queen quality. Historically we know queens used to be productive for 3 to 5 years, while today many queens seem to fade during their second or third year in a hive. As a result, many beekeepers recommend requeening every year to make sure a colony has a good queen. Dr. Tarpy set out to compare the quality of today’s queens against measurements obtained in the past.

There are traits that correlate with the quality of a queen, including physical characteristics (body size and the presence of parasites), insemination quality (stored sperm count and sperm viability), and mating quality (the number of mated drones and the genetic diversity of the available sperm). A honey bee queen, if you didn’t know, mates with multiple drones at the start of her life and stores the sperm in a special organ called the spermatheca.

The genetic diversity seems to be a key factor, as mating with many drones increases the chance a colony will have worker bees with specific advantageous skills, such as the ability to cope with a specific pest. If a queen mates with a drone containing similar genetics, she can produce diploid drones. Diploid drones occur when a specific gene trait (the sex locus allele) in the queen’s egg matches the same trait in the drone’s sperm. Diploid drones are usually killed by worker bees in the pupa phase, reducing the potential population of the hive.

To compare today’s queens against historical queen quality, the lab purchased queens from breeders across the country. To make sure they received typical queens, an undergraduate student purchased the queens and had them sent to his home so that the university’s name wasn’t part of the address. Across various historical measures, Dr. Tarpy found that today’s queens are about the same quality as they were historically. This means that the initial reproductive quality of queens today is about the same as it was in the past. As a result, if our queens are not lasting as long as they used to, something else must be impacting the viability of the queen after she is introduced into a hive.

Another finding Dr. Tarpy shared is that when a hive creates an emergency queen, it does so as quickly as possible. Since a queen from older larva will hatch first, such emergency requeening may produce a poor quality queen. He suggested that beekeepers consider culling capped queen cells after five days as a way to remove queens based on older larva, leaving uncapped cells likely based on younger larva. For example, when starting a nuc or splitting a hive where the bees are allowed to make their own queen.

At the break I asked about swarm and supercedure queen cells. Dr. Tarpy pointed out that queens lay an egg directly into a swarm cell, so swarm cells tend to produce high quality queens. They are not sure how supercedure cells are created, so more research is needed on this, but he suspects that these cells might be created similar to emergency queen cells and thus have a risk of poorer queen quality.

The Queen & Disease Clinic at NCSU 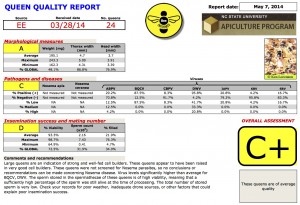 An example of a queen quality report from the NCSU Queen & Disease Clinic.

In his afternoon talk, Dr. Tarpy shared the work they are doing to help beekeepers raise better queens. The lab has distilled various measures of queen quality into a common yardstick using a scale from -5 (poor quality) to +5 (high quality). This allows them to assign a numeric quality indicator for each queen, They test insemination quality for about $20 each (minimum five queens), and perform more sophisticated testing on queens, workers, or drones for about $200. More details as well as pricing can be found on their web site. The queens must be sent live, to preserve sperm viability, and are killed as part of the testing. Results are obtained in a few days to a few weeks, depending the specific procedures requested.

Dr. Tarpy also shared some of the average characteristic they have found through their extensive testing of queens:

The clinic produces a quality report that grades the queen from A to F.

The song Dancing Queen by ABBA debuted in August 1976 to worldwide popularity, topping the charts in over a dozen countries and spending 14 weeks at the top in ABBA’s home country of Sweden. The song was also part of the hit broadway musical Mamma Mia! and the eventual movie staring Meryl Streep, Pierce Brosnan, and Amanda Seyfried.

The line “see that girl” occurs in the chorus, and seems appropriate for a post about honey bee queen research.