On Saturday our Bee School class was invited to the club apiary to visit the bees. The club has three hives hosted at a local monastery for teaching and other purposes. The day started cold but was sunny and in the mid-60s (18° C) by the time we arrived. The pictures tell the tale.

A shot of me taken by a fellow student, with the class in the background before we went to the apiary.

Our instructor Louise getting ready while the class looks on over the fence. The hives used to be further back, but apparently someone tipped them over one winter. The bees died that year and the club built this enclosure nearer to the main building.

The top of the first hive as Louise was smoking the bees. The bees were very docile, pleasantly buzzing around the yard. “There’s nothing like spring bees,” Louise said, and cautioned that Virginia bees are more defensive in July when little or no nectar is available.

The first frame pulled out of the hive. Louse is Director of Education at the Sweet Virginia Foundation, a honey bee conservation and education organization, and recently gave a TEDx talk on honey bees in Herndon, VA.

Here is a shot of my two helpers S and G holding a frame of bees. We were a little worried about how we might react to standing in the middle of an apiary with bees everywhere. They both look pretty happy here.

The top box for the second hive, tipped to show the burr comb the bees have added to the bottom of the box. Louise was also checking for queen cups. After finding the other boxes mostly full of honey, we later found the queen in here.

Marking the queen of the second hive. Louise carefully plucked the little beauty off the frame, took out her pen, and marked her. An impressive feat. 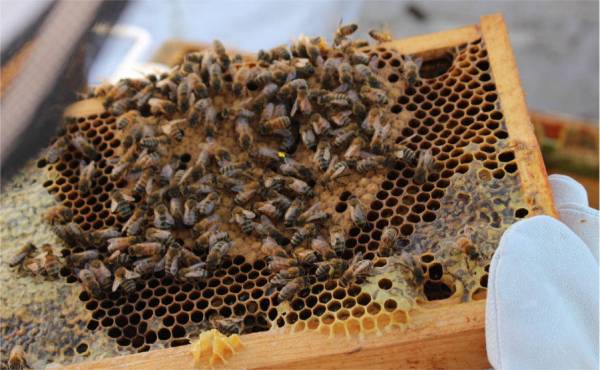 The newly marked queen for the second hive (the yellow dot). The cluster was fairly small and in the top box, so we reversed the boxes. Bees tend to move up, so apparently this is good practice to get the bees working the full hive. Click this image to see a larger view.

The iconic phrase Don’t Worry, Be Happy originated with Indian spiritual master Meher Baba, who took a vow of silence in 1925. He communicated with his followers through an alphabet board and other methods, remaining silent until his death in 1969. His short expression became popular and often appeared in posters and greeting cards.

After seeing one such poster, Bobby McFerrin wrote a song about the phrase. Released in 1988, Don’t Worry, Be Happy became the first a cappella song to reach number one on the Billboard Hot 100 chart.

For me, the title captured the concern of entering a bee yard for the first time; as well as the subsequent enjoyment of bee-ing with the bees. A really fun afternoon.