So just what are these social insects called honey bees? 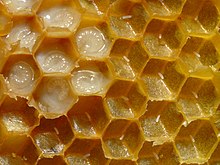 Honey bee egg and larva in the comb

Honey bees, like all holometabolous insects, grow in four stages: egg, larva, pupa, and finally the bee.  The egg, larva, and pupa stages occur in the honeycomb, after which they become a buzzing bee. This you probably know.

You may also know there are three types of adult honey bees. Most honey bees you see are female; the worker bees of the hive. Male bees are called drone bees, with the sole purpose of propagating the hive.  The queen bee, of course, is an egg-laying machine, capable of laying as many as 2000 eggs in a single day.

A honey bee hive has a queen, a few thousand drones, and a variable number of workers.  An active healthy hive may have 50,000 to 80,000 worker bees, while during cold winter months the worker population drops into the thousands.  Drone bees are a warm weather phenomena; when cold whether sets in the workers kick out the drones to conserve resources. 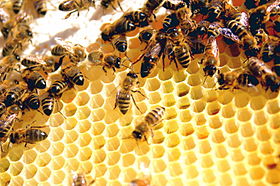 Worker bees with a queen

Honey bees typically reproduce by swarming.  When the hive gets crowded or the right conditions are met, the workers build comb suitable for drones and create queen cells.  The queen will leave with many of the workers as a swarm to establish a new hive.  The first queen to hatch will kill the remaining queens and take over the hive.

Finally, I should mention that while I enjoyed the movie, it may have been because I had already read the book, which was of course better.

3 thoughts on “The Secret Life of Bees”